It’s that time of year again when I look into the Crystal Skull…er, ball, and make some predictions of the continuing challenges and new trends I foresee in Big Data and Data Science for the coming year. Digital Transformation moves beyond just “digitalization”. I chose “Groundhog Day” as representative of how people are confusing Digitalizationover and over again – which is the integration of digital technologies such as cloud native apps and mobile devices into existing operational processes – with Digital Transformation– which is  about leveraging the economics of big data, IOT and advanced analytics (machine learning, deep learning, artificial intelligence) to uncover new sources of customer, operational and market value. Data Monetization Continues to Be the CIO’s #1 Challenge 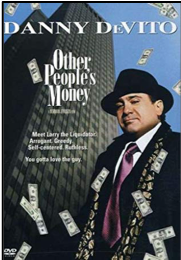 I chose “Other People’s Money” as the movie that represents the challenge that the Chief Data Officer (CDO) faces in trying to drive data monetization. Part of the data monetization problem resides in the fact that many organizations perceive the term “monetization” as representing a “value in exchange” (what someone is willing to pay me for my data) versus “value in use” (leveraging the insights buried in the data to create new sources of value).

I predict that 2019 is the year when organizations’ Chief Data Officers laser-focus their charter around data monetization.  However as I have stated in the past, I think leading organizations will rename the CDO title to “Chief Data Monetization Officer” to clarify the charter and differentiate the CDO/CDMO role from that of the CIO, who is focused on managing the infrastructure that supports the organization’s data (see Figure 2). 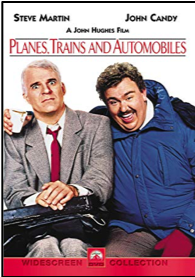 I chose “Planes, Trains and Automobiles” as representative of the struggles that many organizations are having with their data lakes.  Data lakes continue to under-deliver, but in 2019 organizations will realize that their data lake performance problems are not a technology issue, but is instead a focus issue.  Too many organizations are too focused on using the data lake as a way to reduce the costs associated with data (via data warehouse ETL off-loading, data archiving and data staging). CIO’s are missing the bigger opportunity to convert their data lake into a collaborative value creation platform around which the business stakeholders and the data science team can collaborate to leverage data and analytics to power the organization’s key business initiatives such as reducing customer attrition, unplanned operational downtime, and obsolete and excessive inventory; or improving on-time deliveries (see Figure 3). See the blog “Realizing the Potential of Data Monetization…Do I Have Your Attention Now?” for more details on the transformation of the data lake into an organization’s collaborative value creation platform. I chose “Are We Done Yet?” to represent that 2019 is the year that Data Engineering gets its due respects as a full-fledged member of the data science community.  A data scientist is only as effective as the data that they have with which to work, and for the data scientist to be effective, they need to have a data engineer partner-in-crime. 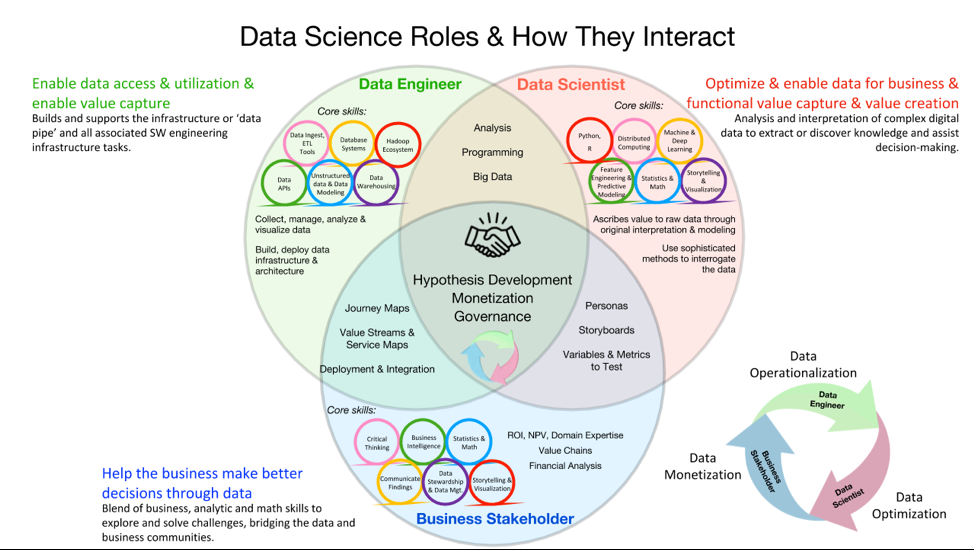 See the blog “A Winning Game Plan for Building Your Data Science Team” for more details on the roles and responsibilities of your data science community members. 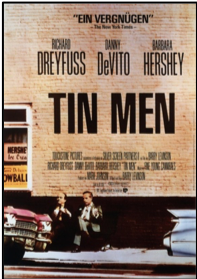 I chose “Tin Men” to represent the over-hyping of Artificial Intelligence (AI) capabilities in 2019, which I expect will get even worse (I expect AI-infused Skippy peanut butter and Cap’n Crunch cereal are just around the corner!). The AI over-hyping around more cultural distractions and human job loss prognostications results in less progress in driving the commercialization and monetization of AI.

But folks are slowly starting to realize that AI, especially in the form of machine learning (i.e., linear regression, logistic regression, decision trees, K-Nearest Neighbor, Support Vector Machine), has been around for decades without causing any dramatic cultural shifts or demise of the human race. I have yet to see a K-means cluster (an unsupervised machine learning algorithm) round up helpless humans for death camps…yet.

Unfortunately, all the AI over-hyping and consternation will delay the business, operational and society benefits that AI (see Figure 5). 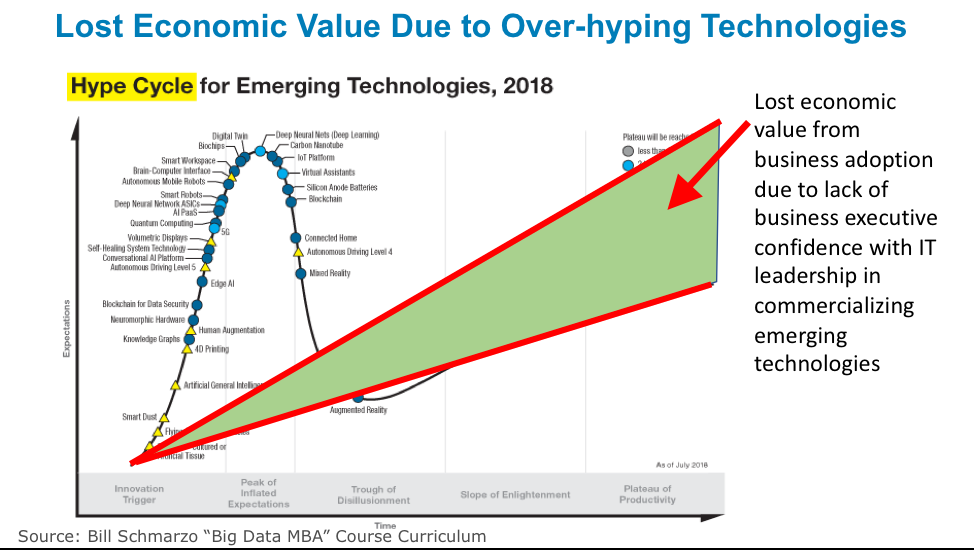 See the blog “Why Accept the Hype? Time to Transform How We Approach Emerging Technology” for more details on the economic costs of over-hyping new technologies such as AI and Blockchain.

The Battle of Tomorrow Is at the Edge I chose “Edge of Tomorrow” to represent the Battle for the IoT Edge(what, you don’t think that movie was a comedy?).  And the battle for the IoT edge will be fought by Industrial (OT), not technology (IT), companies.  The edge doesn’t start at the IoT gateway, the edge starts at the PLC and the sensors that are generating the data.  These PLC’s are getting smarter as more storage, compute, machine learning and AI capabilities are pushed to the edge.

That’s the power of the edge (see Figure 6). 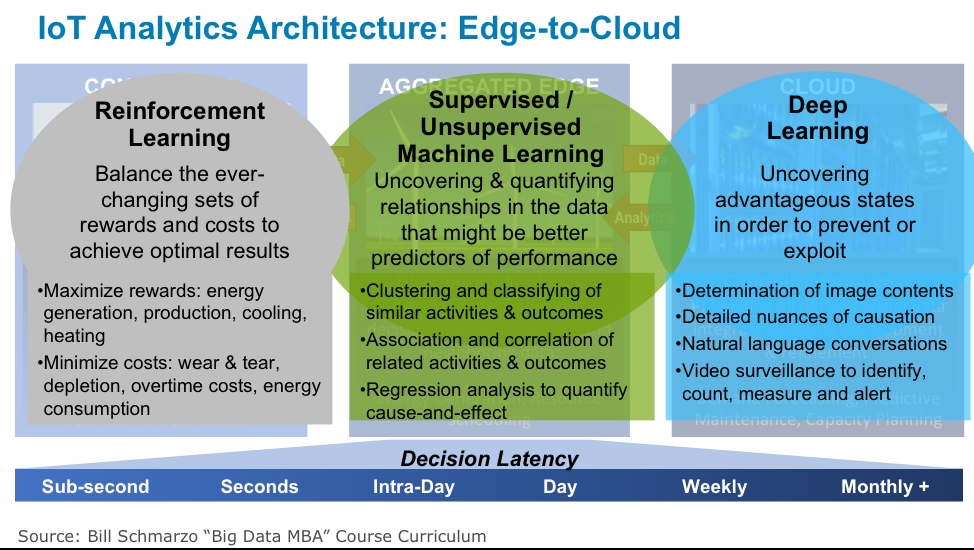 See the blog “Tomorrow’s Digital Transformation Battles Will Be Fought at the Edge” for more details about the data and analytic capabilities offered by the Internet of Things. 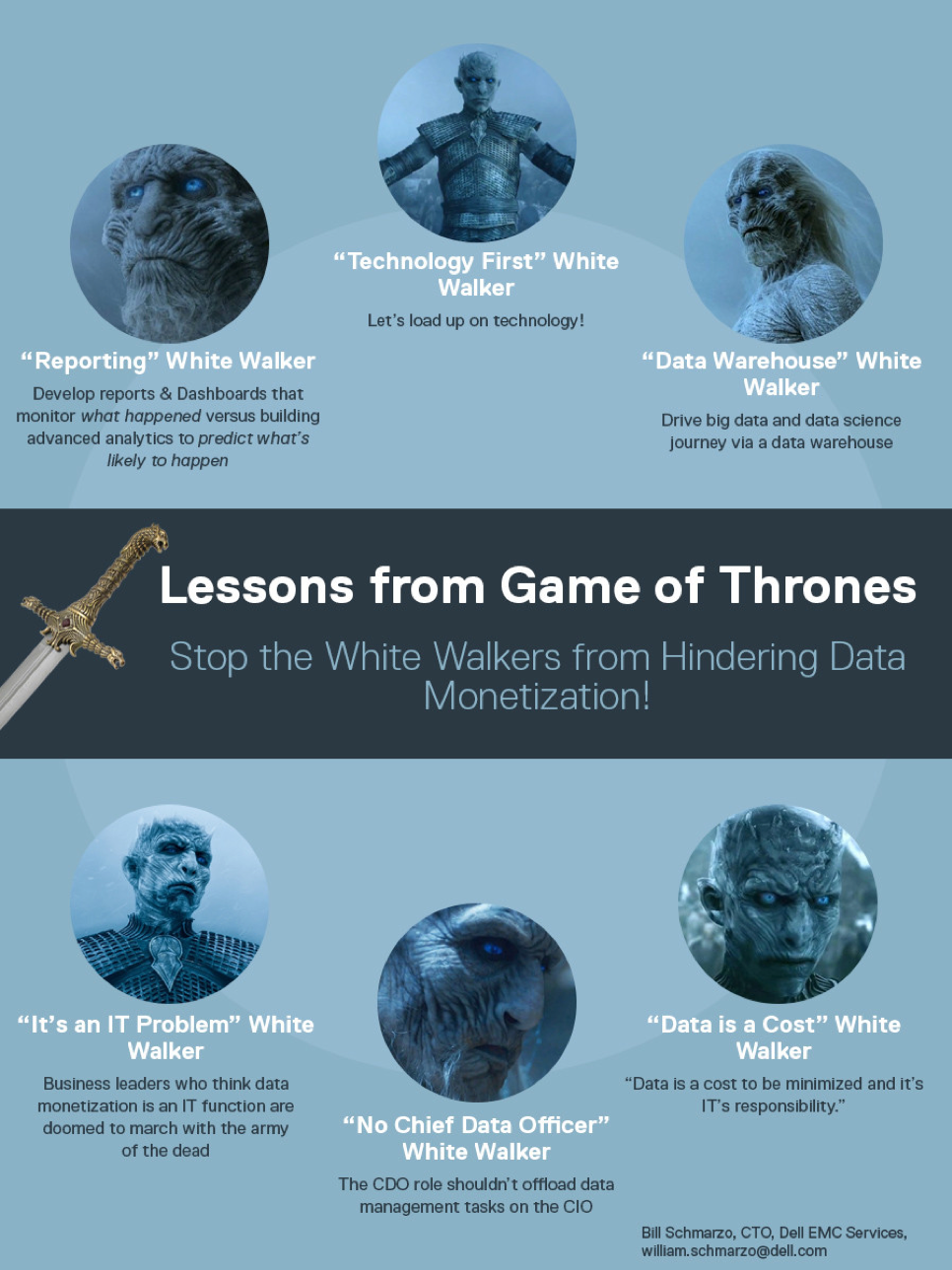