A couple of months ago, Turkey’s Health Minister announced that the positive cases showing no signs of illness were not included in the statistics. This statement made an earthquake effect in Turkey, and unfortunately, the articles about covid-19 I have wrote before came to nothing.

The reason for this statement was the pressure of the Istanbul Metropolitan Mayor. He has said that according to data released by the cemetery administration, a municipal agency, the daily number of infected deaths were nearly that two times the daily number of the death tolls explained by the ministry.

So, I decided to check the mayor’s claims. To do that, I have to do some predictions; but, not for the future, for the past. Fortunately, there is a method for this that is called Backcasting. Let’s take a vector of time series

We would first reverse the time series and then make predictions and again reverse the forecast results. The data that we are going to model is the number of daily new cases and daily new deaths, between the day the health minister’s explanation was held and the day the vaccine process in Turkey has begun. We will try to predict the ten days before the date 26-11-2020.

It might be very useful to make a function to plot the comparison for backcast values and observed data. 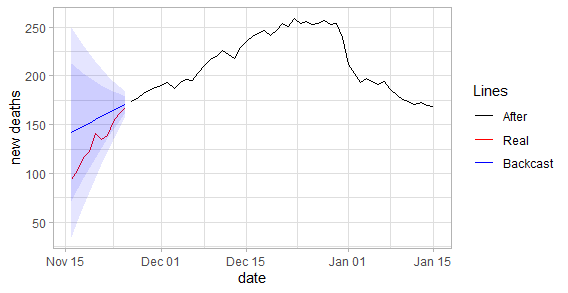 When we examine the graph, the difference in death toll seems relatively close. However, the levels of daily cases are significantly different from each other. Although this estimate only covers ten days, it suggests that there is inconsistency in the numbers given.