Scientix has been invited to participate to Mars InSight Landing in NASA’s Jet Propulsion Laboratory in Pasadena, on Nov 25 – Nov 26 2018. Selected among 30 social media influencers (from over more than 700 applications) to take part in this tour of the Jet Propulsion Laboratory about the InSight Mission, these two days were designed to provide a unique opportunity to live an historic moment of this Space science mission and to meet the team who worked on this major project.

The aim of InSight is to investigate the deep structure of Mars for the first time. As mentioned by Thomas Zurbuchen, Associate Administrator at NASA Science Mission Directorate, InSight is more than a mission to Mars, it will also help scientists understand the evolution of earth from its early start.

During these two days, I (Noelle Billon, Scientix deputy project manager) will share tips, fun facts, links, stories and pictures on this historic event through the Scientix blog.  Stay tuned via twitter (@scientix_eu) or just check out this blog to know what happened in these two days, considered for Space educators, as a milestone for Space research.

About the mission, here are the most important elements to be highlighted:

All of this sounds challenging right? To learn more about the mission check the InSight’s website: https://mars.nasa.gov/insight/mission/overview/ 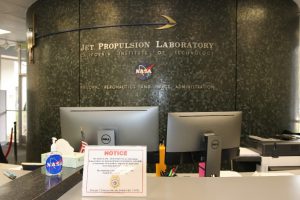 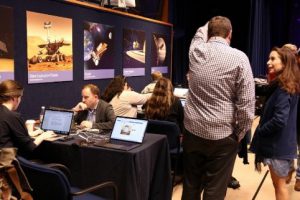 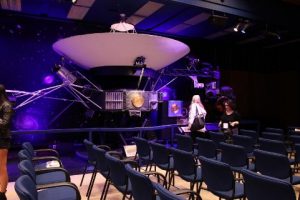 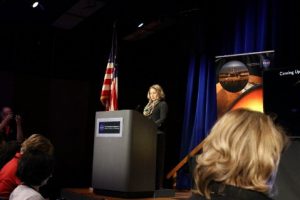 Thomas Zurbuchen below, Associate Administrator at the NASA Science Mission Directorate, highlighted the collaborative aspects of this mission, which also included the work of researchers from France and Germany, among the main ones. 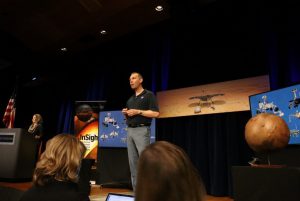 Bruce Barnerdt, InSight Principal investigator at NASA-JPL explained how the seismometer was working.  The sensors in this tool are the most sensitive and resistant that France researchers ever created, as they have to adapt to Mars hostile environment. This seismometer will record P-waves, S-waves and Rayleigh waves which will give eventually a 3D picture of the red planet. It will sit on the Martian surface and takes the “pulse” or seismic vibrations of Mars. Its measurements provide a glimpse into the planet’s internal activity! 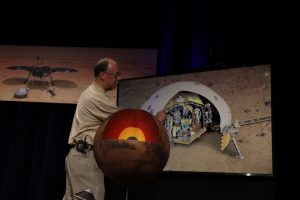 Tom Hoffman InSight Project Manager, NASA-JPL explained the entry of the lander into the thin atmosphere of Mars, the descent and the landing of InSight. These three steps are also known as the “7 minutes of terror”. 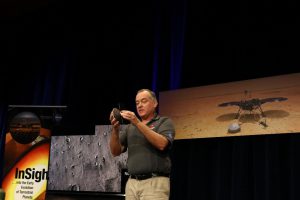 Cody Colley, MarCO Mission Manager, NASA JPL, told us about the two CubeSats which were launched with InSight on May 5th — the first of this kind of spacecraft to fly to deep space.

If this flyby demonstration is successful, the technology onboard each CubeSat will provide NASA the ability to quickly transmit status information about InSight as it lands on Mars. 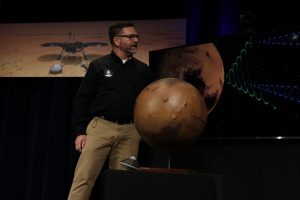 Julie Wertz-Chen InSight EDL Engineer at NASA-JPL explained how the NASA team will follow the event and correct the directions of the lander in order to reach the target point that was initially planned. 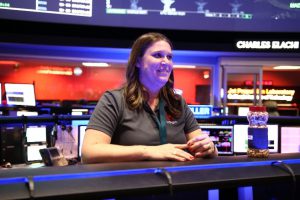 After this pre-landing briefing, we had the opportunity to enter the mission control center with Jim Mc Clure, Space Flight Operations Facility Manager, who explained to us that there were people working on this room continuously 24h a day, 7 days a week since 1946. He also explained how this mission control center is also entitled the “Center of the Universe” as it collects the data from all the rovers and landers that NASA launched the past years all over Space. 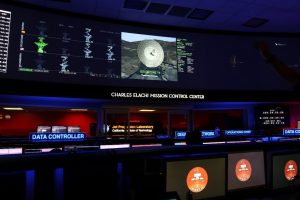 A fun fact: peanuts also called “lucky peanuts” were displayed on all the desks of the mission control. Good-luck peanuts made their first appearance at the Jet Propulsion Laboratory’s Space Flight Operations Facility in 1964 during the Ranger 7 mission. JPL had six failures prior to this effort, so the pressure was on to succeed. The Ranger 7 launch day arrived and with it came the peanuts. Up until this mission, the peanuts showed up only at launch. Nowadays, they are often seen in mission control facilities during critical mission stages such as orbit insertions, flybys and landings, or any other event of high anxiety or risk. The day of the 26th of November is definitely going to have the lucky peanuts.

Julie Wertz-Chen, InSight EDL Engineer at NASA also explained to us where she would be sitting in the room during the day of the 26th and how people were expecting this event for years.

After this unique visit, we had a session with the InSight Team for a Q&A session. Both the engineers working on the InSight mission and the researchers were answering questions from the press and the social media representatives. 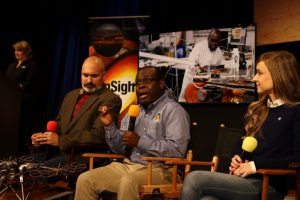 As part of the answers, the data that will be collected should arrive (if the landing and deployment are successful) in June 2019 and both the researchers should be able to use this data as well as the teachers in their classroom.

We heard both the testimonies of seniors engineers who had lived up to 8 mission related to Mars and new engineers for whom this mission was the first one they had the opportunity to live.

After this Q&A session, we had the opportunity to go to the Indoor Mars Yard that you can see on the picture below and which is one of the cleanest room in JPL in order to protect the lander and rover in construction and conduct the necessary tests for the deployment of the rover before the launch. 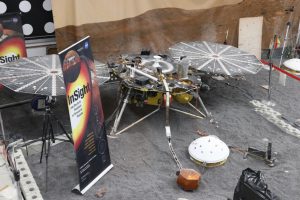 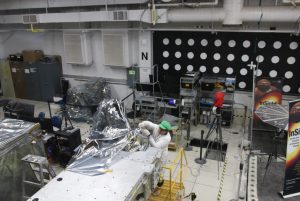 We also discovered the Microdevices Lab, dedicated to the study of micro and nano-fabrication techniques and we could see for example the microchip that was launched with InSight in May 2018 with more than 1.6 million people’s names etched on it. 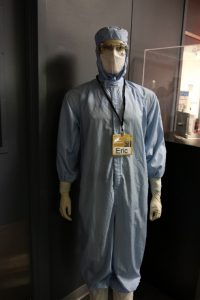 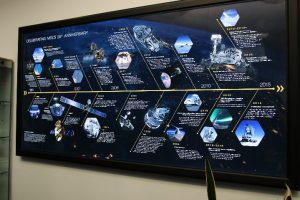 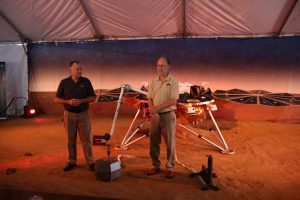 Finally, to end the day, we had a last speech and questions/answers to Bruce Barnerdt and Tom Hoffman about the landing on the 26th of Nov. How do they live these hours before one of the most important days of their life? We could definitely feel the anxiety but also the excitement for such event.

As a final word for this first day “Go InSight” was in all minds.