Ever since I started following stocks again, I have been preoccupied with developing a “game plan” to help prevent me from making emotional investment decisions.  Plans can be improved.  What I have come up with so far is a stress avoidance model to study how different character types might perform in relation to the market.  Since quite a number of investors are actually algorithms – and many trades are algorithmically triggered – the concept of stress needs to be more liberally interpreted.  What “stress avoidance” means to a human can probably regarded as “risk avoidance” to a machine.

As I have written in several blogs, I developed a series of market metrics.  While I have yet to share the exact details, I think it would be fair to say the following: 1) selling occurs when risk is high; and 2) buying occurs when risk is low.  Risk is expressed as a percentage in the case of my system; this means that that 0 percent will generally cause a buy while 100 percent will trigger a sell.  It is therefore possible to create a chart mapping out the different combinations and therefore character types: e.g. 1/50 conforms to the notion of buy-low and sell-high; 50/50 reflects the idea of buy-and-hold – this to say, regardless of the exact purchase price and holding indefinitely.

Below, I labelled a chart from 1946 containing data from the Dow Jones Industrial Average.  The risk levels in this case are averaged over 5 days.  I note four primary character types although of course there is a spectrum: 1) traditionalists; 2) idealists; 3) opportunists; and 4) players.  It is difficult to appreciate the behaviour of the lower sell-risk level characters and particularly the “players” using 5-day risk averaging – since they might respond quite rapidly if averaging is disabled.  I call the chart below an “Advantage Thunderbird Chart” – because it maps out the extent to which the subjects exceed or fall below market performance.  In this chart using data from 1946, the subjects with the lower risk tolerances generally enjoyed the highest returns. 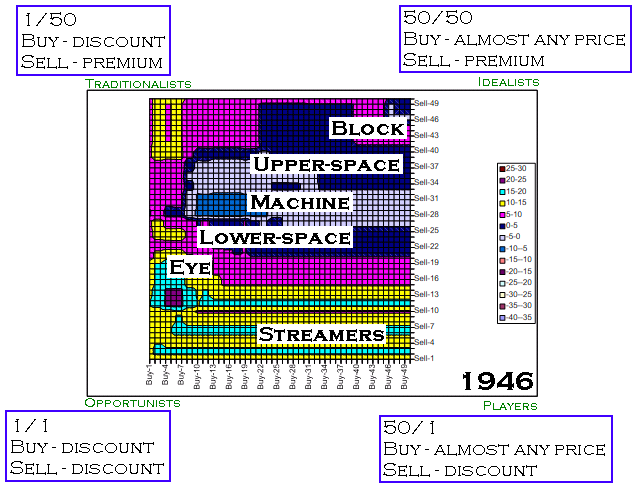 Now I jump forward in time to last Friday to this ETF traded on the Toronto Stock Exchange – less resolution and using no risk averaging.  I chose it specifically to show that sometimes the subjects are relatively unlucky.  Almost all the subjects below score either far below market or just slightly above – the 0-50 on the legend providing a relatively poor portrayal of the situation.  In short, using this risk model, it has generally been better simply holding on to the stock no matter what, which is even more idealistic than the “Idealists” who might sell at a risk level of 46 to 56 percent.

Risk levels at 46 to 56 percent can certainly precede a market meltdown.  I even suggest that a persistent level of blind faith idealism might be an indication of an approaching correction – being euphemistic with my use of the term.  It is therefore no minor commitment to hold a stock under such circumstances.  Perhaps the biggest recent correction most people remember occurred in association with the COVID-19 lockdowns.  There was quite a sell-off.  Those that held on or even bought equities – despite the apparently high risk levels – have in some cases in certain sectors been rewarded well.  Alas, a risk avoidance trading model is premised on lower levels of risk tolerance. Some ideas intended to substantiate this model are as follows: 1) whether machine or human, risk is tolerated only up to a point; and 2) a successful approach tends to attract compliant subscribers.  For example, if subjects from 1/20 to 50/20 are all unsuccessful for a prolonged period of time, their material agents or proxies (humans and computer algorithms) will tend to disappear.  Similarly, if only the fiercest Idealists succeed, this is the monoculture that will prevail.  It is the monocultural success bias that might explain the occurrence of a sudden stock market crash – as many like-minded people make the same decisions around the same time.

I understand the underlying numbers better than graphics on the surface charts.  These charts are fairly backwards-looking.  Suffice it to say that every correction is premised on success stories becoming nightmares.  A success story looking backwards is always fabulous.  In order to be more forward-looking, I check the recent developments to the sell lines: e.g. 4 weeks ago, 3 weeks ago, 2 weeks ago, and last week.  The general idea is to try to find a pattern of change.

It is worth noting that as the sell-risk level increases, at some point the returns must reflect market: if the idea is to buy-and-hold, then in the long-term the rate of return must approximate the market.  There is just no way around this in the long-term.  In the short-term, it might be possible to buy on a dip.  But then going forward, it will be a market-return if no trading occurs.  So from a mathematical standpoint, a high sell-risk subject is unlikely to beat market for long.  I suppose a trading firm might leverage their position in order to financially engineer more returns (borrowing to increase their exposure); but this would involve different types of risks given that the return would merely amplify the change in market value.  I recall one company lending out their equities and then using this to generate a revenue stream.  Anyways, no doubt there are various creative methods to generate revenue such as writing options.  This does not mean that the underlying investment performs better than market, though.

I cannot say that I have developed a game plan yet.  But what is more normal, really?  Wouldn’t a game plan be delusional given such uncertain circumstances?  And if things are normal, why are so many people making such an effort to reassure me that they are normal – as if I am an unfit to decide for myself?  It is a risk avoidance model.  It is necessary to be aware of risk in order to avoid it.  Presumably, people are highly invested in normal.  The whole idea of the model is to take emotion out of the equation.  While this takes care of my response to reality, there is a problem in terms of mass psychosis – or this illusion of normalcy that has the effect of preventing adaptive response behaviours.  Clearly I am not entirely motivated by the technicals.

I took my mother out to a restaurant a few weeks ago.  There were hardly any people indoors.  Most of the customers were on the patio.  Of course, in the winter, those customers will have to decide whether to go inside or not to eat at the restaurant.  Basically the problem is that if they get ill, the local health care system might be unable to respond to the demand for services.  The new Coronavirus is just one of various illness to affect people recently:  H5N1, MERS, SARS, and now COVID-19.  I was thinking maybe more people might consider a different line of work, possibly not owning and operating restaurants and other  social establishments.  Meanwhile, certain public services might wish to have highly trained sanitation and sterilization professionals.  In order to trigger changes, it goes without saying that there must be unemployment and business failures.  (Of course, I recognize a need to support transition programs.)  So I think the next step in terms of the analytics is to ensure that risk avoidance metrics extend from metrics of risk awareness.