Will robots take the place of humans? The question is increasingly apparent, as we are overwhelmed by what is called the Fourth Industrial Revolution. It is estimated that by 2022, 75 million workers worldwide will be replaced by creative processes. But it is not enough. According to the World Economic Forum, the phenomenon will generate 133 million new jobs and activities that do not exist today. We must therefore be prepared for the future.

What are robots and where are they?

The term robot indicates a machine that can perform tasks autonomously. Its three main parts correspond to human skills: the software is the brain, the motor corresponds to the muscles and the sensors represent the sense organs. The computer processes the information provided by the sensors to make decisions and move the motors. Today robots have the most diverse forms, they are found in every sector and help us in many activities. It is therefore important to understand how they work from the early school years and learn how to program them.

Smartphones, tablets, smart appliances, smart toys, video games. All these objects work because someone has programmed them and they act through a code that is executed. Knowing this mechanism from an early age allows us to understand how the world works. 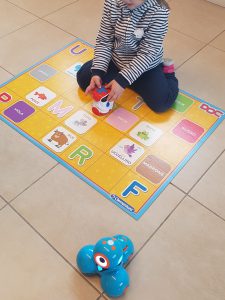 For the little ones there are the Bee bot and Cubetto, for the older ones Dot and Mind, but also Ozobot and Lego Mindstorm. They all have coding as a common denominator.

Educational robotics is a simple and practical approach to procedure to make robots work, computer programming and STEM learning (science subjects). It’s useful to acquire a method of reasoning through learning by doing. Students experiencing educational robotics develop computational thinking, aptitude for analysis and problem solving. It also allows teachers and students to work in groups and to learn in a fun and creative way, improving communication skills, cooperation and teamwork.

In my class we use several robots to face real-world problems. I try to to create lessons based on a multidisciplinary robotics approach. 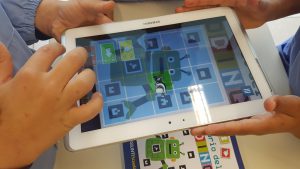 The idea came from the Massachusetts Institute of Technology (MIT) in Boston and from the revolutionary approach of Seymour Papert with the LOGO language and with Mitchel Resnick who created the first Lego/Logo prototypes.

“Children love building objects. So I told myself: we choose a set of constructions and add everything we need to create cybernetic models.”

So Seymour Papert explains his idea of making computers run to children by providing tools that are easy to manipulate.

“The children will have to be able to build a turtle equipped with motors and sensors and have the way to write logo programs to guide it.“

The first experiment was a programmable mechanical turtle through an interface, then in more recent times smaller computers were inserted into the models themselves.

What kind of pedagogy is involved?

Learning by discovery changes the traditional way of teaching because the student becomes an active subject, encouraged to solve problems. He/she gives the instructions and checks what happens. If he makes a mistake, the robot behaves differently than expected and the error becomes an element of metacognition. Through trial and error one learns to solve problems and new ideas are born. In this process, I, as teacher, have the role of mediator, guide. When I use robots and let my students work to program them, they are very motivated and creative. 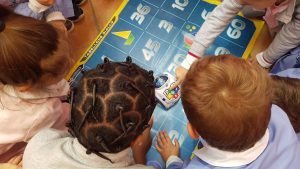 The European Robotics Week (ERW) this year was celebrated from the 16th to the 25th of November. It was developed in 2011 from the desire to bring robotics closer to a wider audience and to build the future Robotic Society. After 8 years from the first literacy campaign, the range of application areas has grown as well as the need for scientific skills required by the labor market. The call concerns sponsors and exhibitors who met in Augsburg in Germany at the opening event (16-18 November), but it also calls on teachers and pupils of all ages engaged in a dialogue on social issues guided by science (for example risky jobs, non self-sufficient people that can be helped by robots). Tens of thousands of students from all over Europe had the opportunity to interact with the robots, integrating the teaching experience with an autonomous, exploratory and self-motivated learning path. My student participated in this initiative with many planned activities and funny games. Read about it if you’re interested: https://www.eu-robotics.net/robotics_week/

Pictures are the author’s own.