The 2021/03/03 update to EViews 12 has two new smaller Variable Selection features. These will help you extract information on the outcome of any selection method and obtain diagnostics on the selection process for a subset of methods.

The first new feature is a way to extract lists of the search variables that have been kept or rejected by the selection procedure. Naturally, they are the data members @varselkept and @varselrejected. For any Equation object (say, “EQ”) that has been estimated with any of the variable selection techniques, the calls
[email protected]
[email protected]
will return space-delimited lists of the variables in EQ that were kept or rejected by variable selection, not including the always included regressors.
The second new feature is additions to the views for Variable Selection. For the Uni-directional, Stepwise, and Swapwise methods, there is a new Selection Diagnostics menu. The former two have six items in this menu: R-squared, t-Stats, and Alpha-squared Graphs, and corresponding Tables. Swapwise has R-squared and Alpha-squared Graphs and Tables. Each graph and table show the chosen statistic at each step in the selection process. Choosing R-squared Graph for forward stepwise selection in an example dataset displays: 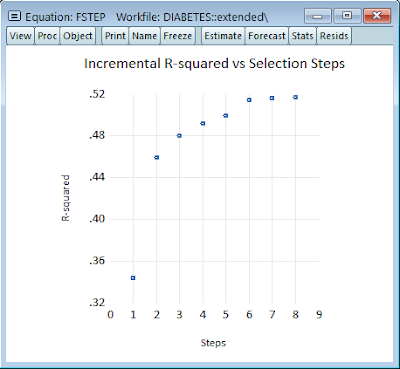 showing the increase to the R-squared statistic with each step in the selection. It is interesting to see the large contributions to R-squared in just the first few steps.
R-squared Table shows the same information in table form: 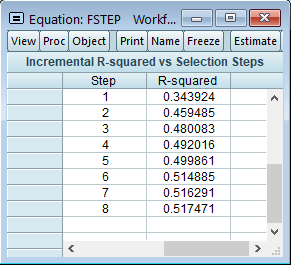